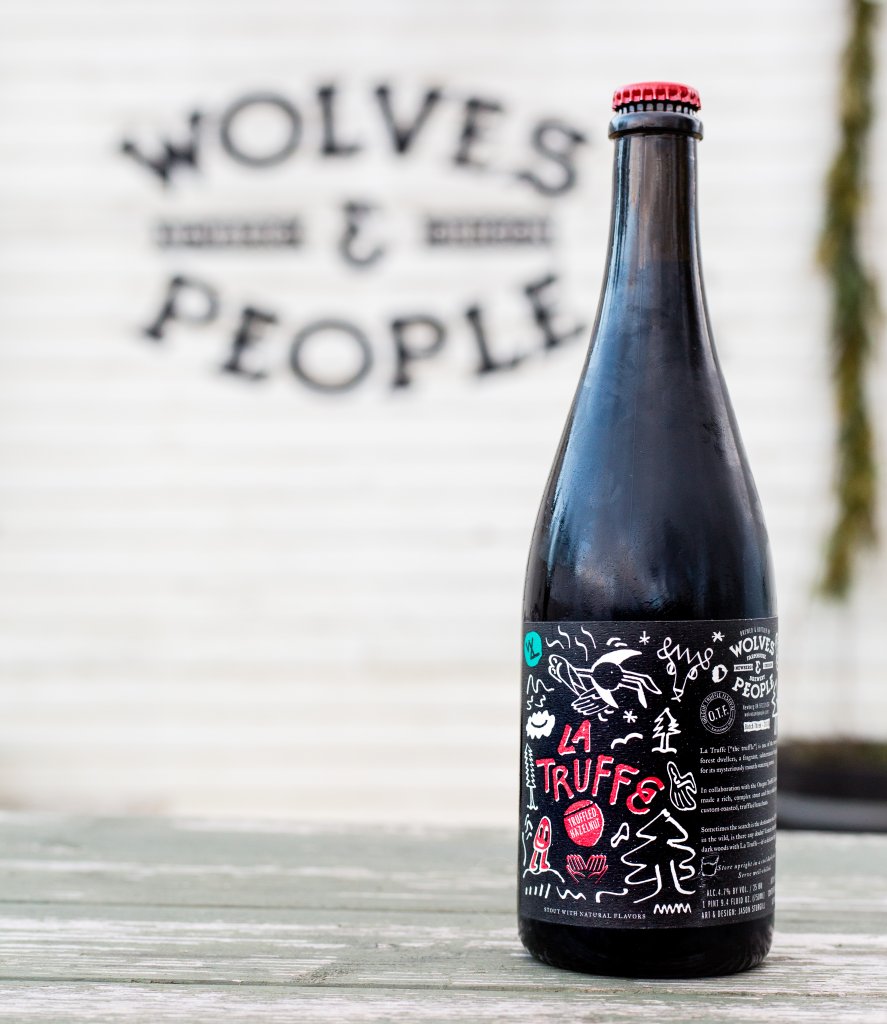 It isn’t easy to open a farmhouse brewery given zoning issues, seasonality of ingredients, and weather challenges. But Wolves & People Farmhouse Brewery in Newberg, Oregon, has strengthened their local connections through partnering with the Oregon Truffle Festival to use Oregon white truffles in their seasonal beer La Truffe.

“We got up to 5 pounds of Oregon white truffles from the Truffle Fest and it’s just incredible,” says Christian DeBenedetti, founder of Wolves & People. DeBenedetti grew up on the hazelnut farm that now houses his brewery. He’s long been a friend of the Oregon Truffle Festival, and his first book, “The Great American Ale Trail,” which was a curated list of 425 destination breweries, was part of the festival’s bookstore since its release in 2011.

“The festival invited me to read from my book, and I went truffle hunting with some foragers with the festival,” he recalls. “I was instantly hooked on the truffle process. I’d eaten truffles before but had never gone out truffle hunting and found them.”

From that experience emerged the idea of doing a truffle beer, but Wolves & People was still just a glimmer of an idea. As the brewery approached its opening in May 2016, DeBenedetti and the Oregon Truffle Festival founders talked more earnestly about collaborating on a truffle beer. When the time came, former head brewer Jake Miller prepared a 5-gallon private test batch of La Truffe.

“It was served at a beer dinner in Dayton, Oregon, and people loved it, so I knew we were on to something,” DeBenedetti says.

It’s challenging to get more than a subtle flavor in truffle beer. DeBenedetti says he’s tried a few truffle beers from other breweries and the flavors tend to be disappointing. “Some use fake-tasting truffle salt, some have the truffle brewed directly into the beer which destroys the aroma, some infuse the truffle flavor with alcohol,” he says. “None of those options seemed like the way to go.”

Since experimenting with La Truffe for the past three years, he’s figured out a creative solution which transports the truffle flavor into the beer. First, he took a cue from recommendations that he seal his truffles in an airtight container with eggs and hazelnuts. He used 5 pounds of dry-roasted hazelnuts (DeBenedetti still calls them filberts) as the vector, infusing them with Oregon white truffles for 10 days as a test batch.

“After I got those hazelnuts back they were completely infused with the truffle aroma, so we then scaled up to 50 pounds,” DeBenedetti recalls.

The truffle-infused hazelnuts were added to a stout with roasty, cocoa-like aromas. The 4.7% ABV beer is brewed using the farm’s own well water and local hops and as many local grains as they could find. They brewed seven brewers barrels, which is 210 gallons. The beer was not quite ready to serve at this year’s Oregon Truffle Festival dinner, but the brewery does still have some bottles for sale on site. They have one keg left which they tapped into at their third-year anniversary party held the weekend of June 15.

“It’s really balanced, a touch sweet with some chocolatey flavors pushing that almost decadent almost desserty feel without being too high in alcohol,” he says.

DeBenedetti says he’s thrilled that he gets the chance to partner with the Oregon Truffle Festival and bring beer into that arena of highly creative, highly interested eaters, and in particular eaters and chefs who are focused on connecting their food and beer with the local terrain.

An increasingly large segment of the population demands food and drink from small, independent, and local providers. By presenting an ingredient like the Oregon white truffle in beers and food, and providing truffle hunting and eating experiences, collaborations such as this one show that by traveling to the places where ingredients are grown and used, visitors can experience the landscapes and culture that shape the products.

“We’re really proud to be affiliated with the Oregon Truffle Festival and we think it does complement our mission that beer can be elevated and have its place at the table,” says DeBenedetti. “La Truffe is a beer that we’re really excited to bring into that fine dining realm and play a part in what the festival is all about and hopefully expand people’s minds about what’s possible with beer.”