Wall Street Journal: In Search of the Best American Truffles 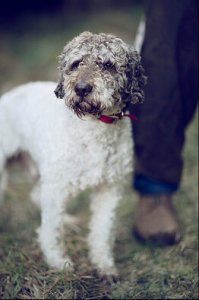 Long considered inferior to European varieties, American truffles are making a comeback with a festival in Oregon and a few highly skilled dogs leading the way.

“ALL RIGHT, TOM, lavora!” barked Jim Sanford at the curly-haired dog sniffing the duff. A cheery, bilingual Lagotto Romagnolo, Tom possesses a nose finely trained to the scent of culinary truffles. Some years ago, Sanford boasted, Tom unearthed 200 pounds of black Périgord truffles in a Tennessee orchard—a haul worth $240,000. On this January morning, Tom hunted the Oregon winter white truffle, a wild fungus that thrives beneath young Douglas firs in the Willamette Valley. I watched as Tom, latching on to a whiff, suddenly dashed over to the trunk of a tree. He raised a leg. “OK, now he’s going to pee,” Sanford explained. “He always has to approve the stand of woods. I’m Tom, and I approve this forest.”

The forest Tom approved of is located behind a bed and breakfast near Eugene. Oregon is home to four of the seven wild culinary truffle species native to North America. At a mushroom symposium here in 1977, James Beard, the dean of American gastronomy and an Oregon native, is said to have tasted a local white truffle and deemed it as good as Italian white truffles. Today, Italian white truffles command $2,000 per pound; Oregon whites, in top form, fetch $400 per pound. At some point, Oregon’s wild truffles acquired a reputation as a second-rate talent. It’s hard to find one served on a dinner plate outside of Oregon. This frustrates Charles Lefevre, who holds a Ph.D. in forest mycology from Oregon State University, where researchers have been studying truffles for a century. “The market underappreciates it, but we have a culinary treasure here,” he said.

In an effort to rehabilitate the stature of American truffles, in 2006 Lefevre and his wife, Leslie Scott, founded the annual Oregon Truffle Festival. It was the first festival of its kind outside of Europe. “Our intention was to stimulate the birth of an industry,” Lefevre told me in January. This year’s festival, held at the peak of truffle season, sold out. There were truffle forays and truffle-cooking classes and a taste of many things–plus–truffles: beef tenderloin, cured with Oregon white truffles; cupcakes, baked with Oregon black truffle–infused butter; and popcorn dusted with truffled caramel.

Oregon white truffles have a garlicky-cabbage aroma similar to the Alba white truffle, the jewel of Italian cuisine. By a wide 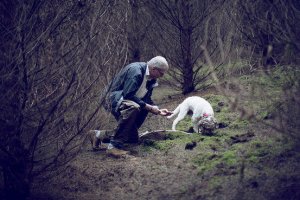 A FUNGUS AMONG US | Tom, a Lagotto Romagnolo, hunting Oregon winter white truffles with his trainer, Jim Sanford Photography by Laura D’Art for WSJ. Magazine

consensus, they are not as intense as the Italians, “but what they lack in intensity they make up for in aroma complexity,” said Jack Czarnecki, author of the Beard award–winning A Cook’s Book of Mushrooms, who holds the only license to produce truffle oil in the United States. The Oregon black truffle—tasting of pineapple and musk—is altogether distinct from the French black Périgords. Over the years, Lefevre has pitted Oregon truffles against the prized Old World varieties in a number of unscientific blind tests. “The Oregon truffles have always come out on top,” Lefevre told me. “I would not conclude that the Oregon white truffle is necessarily better. But the European variety still costs me $1,500 a pound, where the Oregon white truffle at that time was $80 a pound.”

Truffles are the strange fruit of a fungus. Unlike mushrooms, they develop entirely underground, and when fully ripe, emit a

beguiling, aromatic gas—an “eat me” broadcast —designed to lure an animal to spread its spores. Truffles actually mature and ripen over several months, like tomatoes on a vine; an immature truffle has the aroma of a Styrofoam ball. Foragers in Europe use trained dogs or pigs to sniff the ripe ones, ensuring a crop of uniformly high quality; Italian law even mandates the use of dogs. (Sows are drawn to the wild Italian white truffle by a scent that resembles the sex pheromones of male pigs.) In Oregon, mushroom foragers—”hippie harvesters,” as one local chef put it to me—have historically used steel rakes to collect local truffles. Raking is an indiscriminate method; it reaps both mature and immature. Early on, odorless truffles—carrying the culinary value of green tomatoes—ended up in the hands of chefs. The reputation stuck.

When Lefevre founded the Oregon Truffle Festival, there were hardly any truffle dogs west of the Mississippi River. In east Tennessee, a plant pathologist named Tom Michaels, a graduate of the same Oregon State University truffle program as Lefevre, was cultivating Périgord truffles using oak trees he’d imported from France. Michaels brought his truffles to Blackberry Farm, a luxury inn at the foot of the Smoky Mountains. He and the proprietors struck a deal: Michaels would supply Blackberry with black truffles if the farm would lend him a dog when he needed.

“This dog started everything,” Sanford told me, as we followed Tom following his nose across a carpet of fir needles. “Dove? Dove? Good boy, Tom. Molto bene.” After a career as an elephant trainer, Sanford ended up at Blackberry Farm, where he trained Tom to find Michaels’s truffles. (Sanford-trained dogs now sell for $6,000 each.) Lefevre, looking to give Oregon truffles their due, recruited Sanford to train dogs at the truffle festival. When Tom trotted into his first Oregon forest, he unearthed 25 ripe winter white truffles in half an hour. I watched him take about a minute to find one, an exhilarating sight. He announced this discovery by quietly pawing the ground: Buried under a few inches of duff, like a rough jewel, was a knobby, golden-colored truffle.

Students at Sanford’s training seminar had brought their Labrador retrievers, German shepherds and one poodle. There are now at 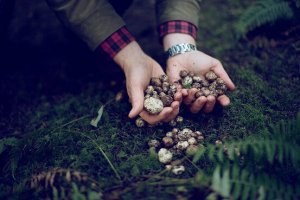 least four truffle-dog trainers on the West Coast. “It’s exploded,” Kris Jacobson, a former K9 cop in Eugene who founded Umami Truffle Dogs, said about the demand from chefs for dog-hunted truffles, which cost twice as much as raked truffles.

At Sanford’s training I met Jason Germick, a bearded 37-year-old who showed off a bowl containing two dozen freshly picked white truffles. He led a shaggy Lagotto Romagnolo named Aldo—Tom’s grandson. Germick had recently left a 12-year career as a financial advisor with JP Morgan Chase in Seattle to “pursue his passions.” He saw a fertile opportunity in truffles. His friend owns a few acres in Washington, where they intend to plant oak and hazelnut trees inoculated with Périgords. (It takes five to seven years for a baby tree with Périgord spores to bear fruit.) An Oregon couple I’d met over truffle eggs that morning had a similar plan: They handed me a card for their crowd-funded campaign to build a Perigord truffle orchard.

Lefevre sees an industry for the wild Oregon truffles as well as the lucrative Périgord truffles, which sell for $800 per pound and thrive in the same terroir as the area’s grapes. (No one has successfully cultivated the Italian white truffle outside of its native 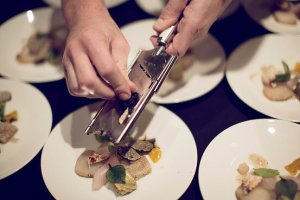 habitat; Lefevre is in the early stages of figuring out how to farm the wild Oregon varieties.) “This group of people is comparable to the demographic that pioneered the wine industry in California 50 years ago,” said Lefevre, who has a 14-year-old business, New World Truffieres, selling oak and hazelnut seedlings inoculated with Old World truffles to farmers across North America. In a 2009 feasibility study, Lefevre and his colleagues estimated that sales of cultivated and native truffles produced in Oregon could earn $200 million annually—and bring in $1.5 billion more through other economic benefits, like tourism.

“This is not emus—one of these hobby crops where somebody’s just selling an idea but there’s not actually a market,” Lefevre told me. “There is a big market for truffles already. It’s just a matter of figuring out how to do it to reduce the risk, to make it more reliable, more predictable. I believe we are at the very early stages of a burgeoning industry.”