The Latest from the Oregon Truffle Festival 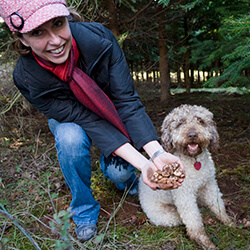 Do Some Serious Gourmet Mushroom Hunting in Eugene

How to search for—and eat—the best of Pacific Northwest mushrooms and truffles.

Every January, the Oregon Truffle Festival spreads mushroom mania through two long weekends—January 25–28 in Eugene, then February 16–18 in the wine country of Yamhill Valley. The festival offers the three basic elements to becoming a fungus connoisseur.

WHY Fungus education, cute pups on the hunt, and James Beard–worthy dining.

WHEN The festival runs two weekends in January and February, but Oregon’s four truffles mature around the calendar.

INDULGE The easiest way to prepare truffles is sliced over macaroni and cheese—the festival even holds a Truffle MacDown cooking contest.