The first harvest of black truffles from Jackson Family Wines produced 17 of the valuable tubers. 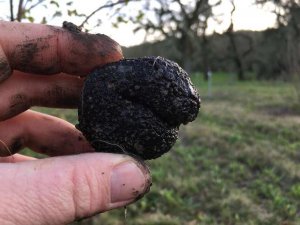 In the great race to grow black truffles in Wine Country, Sonoma County has beaten out Napa Valley despite getting a later start.

Jackson Family Wines — owner of Kendall-Jackson, La Crema, Freemark Abbey and other wineries — just announced it harvested 17 of the prized fungi in the hazelnut and white oak orchard it planted and inoculated with Tuber melanosporum (Périgord truffle) spores in 2011 outside Santa Rosa, beating out similar efforts in Napa Valley. The harvest took place several weeks ago, and though the pioneering truffles themselves have disappeared in a cloud of risotto and Pinot Noir, it was the first successful harvest among several orchards betting on Wine Country as the world’s next great truffle-growing region.

Read the entire article in the SanFrancisco Chronicle here.