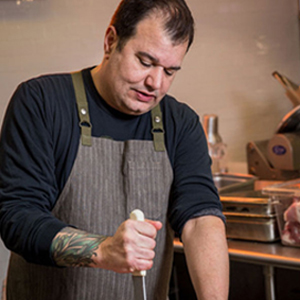 Rocky Maselli recently returned home to Eugene after a successful tenure at San Francisco’s celebrated Italian restaurants, A16 and A16 Rockridge, which he opened in 2013 to enormous critical praise. He served as their company chef since 2014, leading both restaurants and an expansion in Japan. After serving as Marché’s chef from opening in 1998 through 2010, Rocky opened Osteria Sfizio, before moving to San Francisco in 2012. He became a vpn-certified pizzaiolo in Naples, is a deep believer in culinary traditions, and is committed to celebrating sustainability and the ingredients of the Willamette Valley.