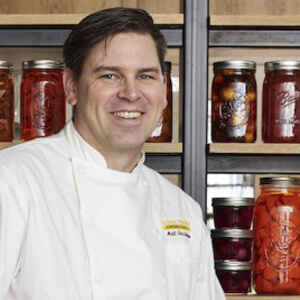 Chef Matt Christianson focuses on redefining the modern steakhouse with an emphasis on Northwest, sustainable ingredients and simple, straightforward preparations as executive chef at Urban Farmer in The Nines Hotel.

Christianson has learned to unite his love of working with farmers and local product with his affinity with for urban environment. His first foray into the kitchen was as a line cook in at Fanny Hill Victoria Inn in Eau Claire, Wisconsin. Christianson then moved to Evanston, Illinois to work at Trio until he decided to pursue culinary school. In 1997, he graduated with an associate’s degree in Culinary Arts from the Culinary Institute of America.

Christianson’s largest influence is the regional food culture of San Francisco, which he now emphasizes in his cooking by maintaining excellent relationships with farmers and applying “farmer-centric” values. When Christianson isn’t in the kitchen, he’s spending time with his sons, biking, or building something with his hands.