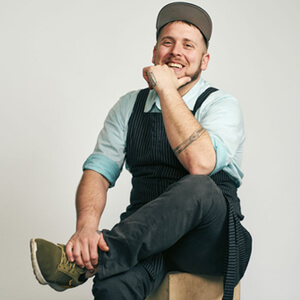 Karl Holl is a chef, butcher, forager, and farmer all tied into one. He grew up in a small town in Vermont, cooking alongside his German grandmother at her small restaurant. Following studies at the New England Culinary Institute, Karl was drawn west, first to the Martini House Restaurant in the Napa Valley and then to Larkspur in Vail, Colorado. He then took the position of Chef de Cuisine at San Francisco’s Perbacco Ristorante, where he developed a deeper love for all things Italian and an even greater passion for making salumi.  Having always dreamt of growing and raising everything he cooked, he decided to learn about farming and joined Outstanding in the Field on a one-year, ninety farm tour. When he settled in Oregon, he helped build LetUmEat and recently launched the permanent pop-up Spaetzle and Speck, housed within Park Avenue Fine Wines in Portland, Oregon. There, he grows and raises everything he cooks, while also expressing his love of northern Italian cuisine.