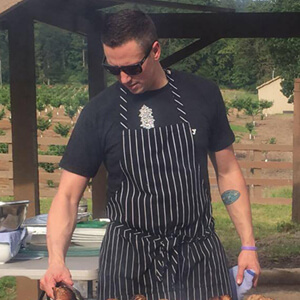 Owning a seasonal, farm-driven restaurant has been a dream of Valley Commissary Chef/Owner Jesse Kinchloe since growing up in Healdsburg, in the heart of Sonoma county. Kinchloe moved to the Pacific Northwest from his native California to attend culinary school in Portland. After graduating in 2006, he received an externship at James Beard Award-winning restaurant Crush in Seattle, where he met his wife Erica. The two moved to Oregon when Kincheloe received an offer to work with Tommy Habetz at Meriwether’s restaurant in Portland, and later moved to wine country to be closer to local farms and wineries. Kinchloe consulted for local restaurants such as Jory at the Allison Inn, Community Plate and Walnut City Kitchen before opening his own McMinnville restaurant, Valley Commissary, in 2014.