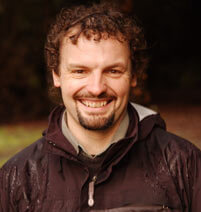 Dr. Charles K. Lefevre began his college education studying Physics and Chemistry, which led to two years operating a nuclear reactor producing radioactive compounds for medical research, and three more operating telescopes for research on black holes and white dwarfs. His work with fungi began at the University of Oregon, where he graduated Summa Cum Laude and Phi Beta Kappa after completing a thesis on fungal endophytes of Douglas fir. He spent the following several years at a biotech company labeling mushroom toxins, snake venom and other organic compounds with fluorescent dyes for biomedical research before resuming academic work. His doctoral research was in Forest Ecology at Oregon State University where he studied the host associations of the American matsutake mushroom.

Naturally, Dr. Lefevre’s work with truffles began as an “underground” project done quietly on the side. While still in his doctoral program, he was asked by a local farmer to inoculate hazelnut seedlings with Tuber melanosporum. He made his public debut in the Los Angeles Times, which led to the creation of his company, New World Truffieres, Inc. two years before completing his degree. New World Truffieres has since produced inoculated trees for numerous truffle orchards throughout the U.S. and southern Canada and has received media attention in the New Yorker, Forbes, Audubon, the New York Times, Smithsonian, CNBC, the Discovery Channel, and many others. NWT continues to be a leader in the North American truffle cultivation industry producing ever increasing numbers of truffle trees and engaging its partners in pioneering truffle cultivation research.

In 2006, Dr. Lefevre and his wife, Leslie Scott, founded the Oregon Truffle Festival, which was the first festival of its kind outside of Europe. Its purpose is to celebrate both the native Oregon truffles, and the burgeoning truffle cultivation industry in North America through a variety of culinary and educational programs. Since its inception, this dynamic and participatory truffle festival model has attracted scientists, authors, farmers, dog trainers, and gourmands from around the world, and continues to innovate as it stays ahead of the industry growing around it.