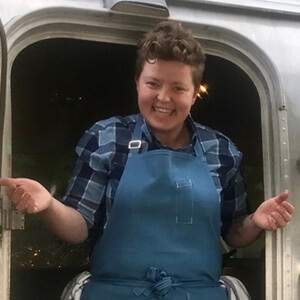 Crystal Platt’s very first job was at a bakery in her hometown of Estacada, Oregon. After attending the culinary program at Lane Community College, Platt landed a position at Marché, Eugene’s iconic farm to table restaurant, and worked her way through the ranks to Chef de Cuisine. Drawing on this foundation, her culinary travels and the food memories of her youth, she opened Lion & Owl with her wife in May of 2017 in a converted Airstream. They spent two summers feeding Eugene an elevated brunch menu cooked on a small Magic Chef stove in With only 20 seats available seats, they quickly outgrew their sweet Airstream space. In 2019, they opened Lion & Owl in downtown Eugene, expanding to include dinner service three nights a week. Caviar, oysters, and, of course truffles, can be found on their menu seven days a week.