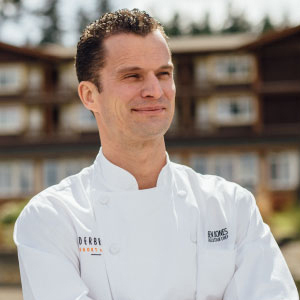 Alderbrook Executive Chef Ben Jones has almost two decades of extensive experience in the culinary industry, most recently at The Resort at Paws Up in Greenough, Montana. Jones brings skills in fine dining, banquets, off-site catering and large specialty events. He is responsible for overseeing the food and beverage operation while working to elevate the culinary program. Chef Jones has worked at several restaurants and hotels in Chicago, including work alongside Graham Elliott at TRU and heading up the Garde Manger team while Rick Tramanto was writing his Amuse Bouche cookbook. He has also tackled a variety of culinary experiences outside of the restaurant, which included cooking classes, television cooking demonstrations, and joining the James Beard House as a guest chef in March 2016. When not hard at work in the kitchen, Chef Jones can be found by the water, hiking or cooking with his wife and children.