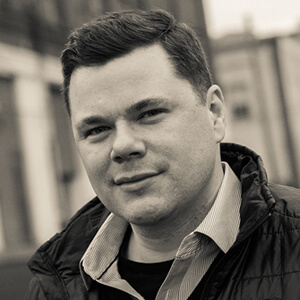 Mike Thelin has a successful history of creating projects that grab attention and make a big impact on neighborhoods, cities and regions. A self-proclaimed food evangelist, Mike is co-founder and producer of Feast Portland, one of North America’s most highly regarded food festivals and co-founder and partner of the Hot Luck food and music festival in Austin.

With relatives and close family friends from Mexico, Vietnam, Korea and Syria, Mike’s family inspired a love for food and culture at an early age. While early gigs like being a TV technology reporter in San Francisco and the youngest member of a government relations team at a Fortune 50 company in DC opened doors to the business and media world, his most impactful experiences were food and travel inspired: working front desk at a youth hostel in Ireland, a year teaching English and eating his way through Madrid, a summer spent on an organic farm in Portugal and hiking and mountaineering in the peaks of Montana, Switzerland and Spain.

Mike became a food writer just as Portland’s food scene was taking flight: First as the restaurant columnist and food critic for Portland’s Pulitzer Prize winning Willamette Week, then as founding co-editor of Eater Portland, and later by leading food coverage for Portland Monthly Magazine. It was during this time when a friend asked him to run Portland’s Indie Wine Festival that it all clicked. Mike’s love for collaborating with chefs, understanding of media, passion for programming, and superpower for sponsorship made it clear that the event world was a perfect fit.

That first gig led to others: first as host chair of the International Association of Culinary Professionals 2010 Portland conference when he led a team that recruited luminaries like Ruth Reichl, Judith Jones and Madhur Jaffrey. Soon after, Eater asked him to produce the first ever Eater Awards in NYC, and a colleague in Austin tapped him to head talent and sponsorship for the Texas Hill Country Wine and Food Festival, then the largest food event in Texas. As his client list grew and America's food scene blossomed, Mike became a national player. He traveled the country as a talking head on more than 40 episodes of the popular Cooking Channel show Unique Eats, through which he developed a national network of chefs while launching other projects, including a plant-based cooking school event series with Whole Foods Market.

Mike’s dream of creating a landmark food festival in Portland took flight over coffee with Food Network veteran Carrie Welch in 2011, and the duo launched Feast Portland in collaboration with Bon Appétit Magazine the following year. Since then, through a reputation for inventive and relevant programming and stylish brand marketing, Feast has grown into one of the most respected festivals in the country, celebrating Portland’s rich food community and welcoming the best chefs in the world year after year. Feast has donated more than $500,000 to hunger-relief charities. Mike also heads the consulting arm of Feast, overseeing large-scale event and content-related projects for clients such as Visit Seattle, The Oregon Wine Board, Tillamook, Travel Portland and Hot Luck Food & Music Festival, which his team helped launch with Barbecue Kingpin Aaron Franklin in 2017. He is a published contributor to Phaidon Books and served on the Chefs and Restaurants Awards Committee for the James Beard Foundation.